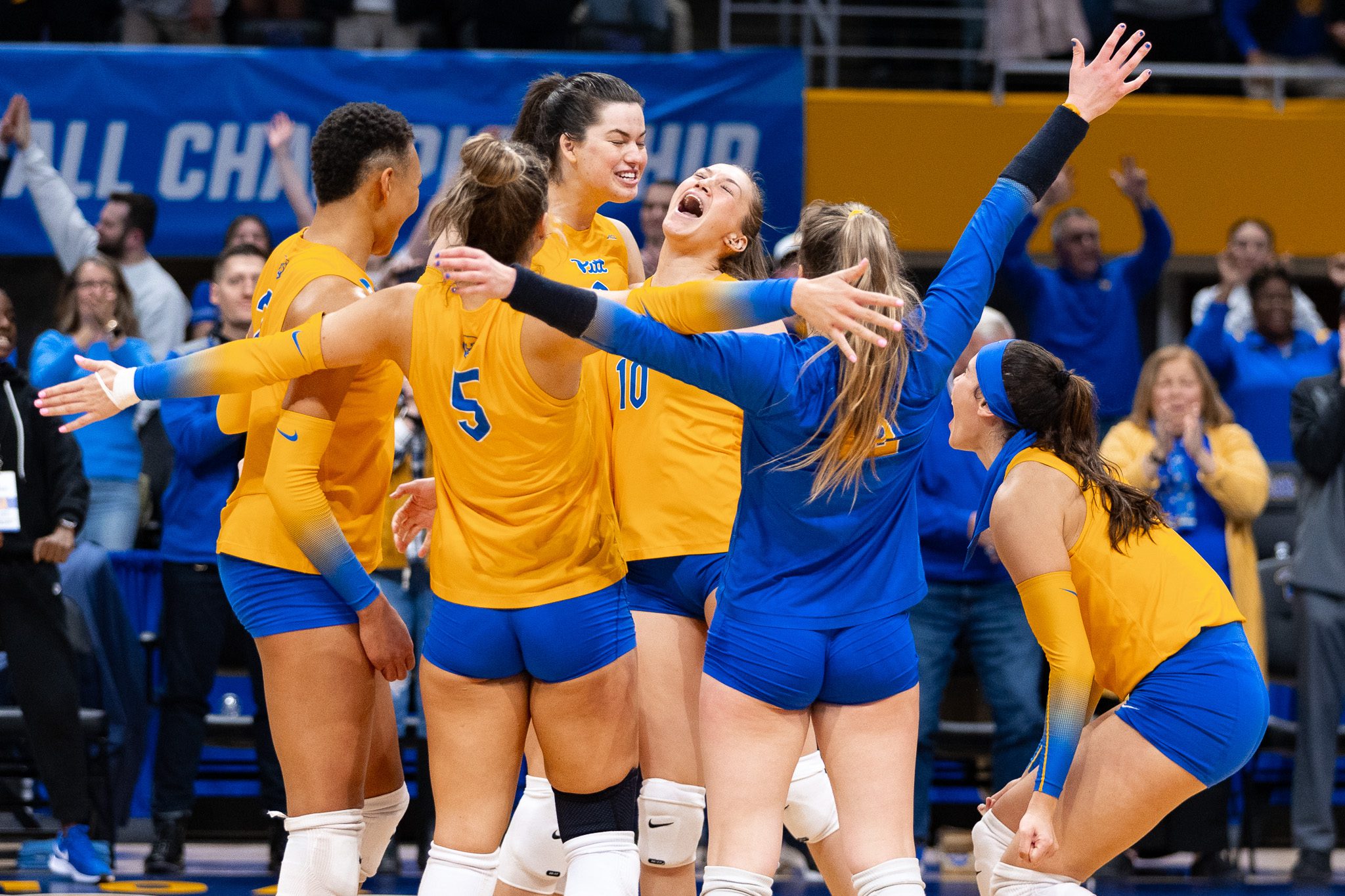 No. 2 Pitt battled No.1 Wisconsin throughout five sets in a thrilling match that both teams had a plethora of chances to win in Madison, Wis. Pitt battled hard over the last few points and managed to win the final set to defeat Wisconsin on the road to make it two consecutive trips to the Final Four.

The Panthers’ (31-3) victory ends the Badgers’ (28-4) chance of repeating as National Champions. It also ended a 21-game winning streak for the Badgers at home and earned the Panthers their third victory on the road over a top ten opponent this year. They defeated then ranked No. 7 BYU Cougars on Sept. 2 and then ranked No. 10 Georgia Tech Yellow Jackets on Oct. 9.

The Badgers responded with a six straight points to earn a 23-21 lead, but the Panthers tied it at 23 off a service error and an attack error.

Wisconsin won the first set, 25-23, with back-to-back kills from fifth year middle blocker Danielle Hart and junior middle blocker/right side hitter Devyn Robinson. They finished the set with a 8-2 run to take the lead, 1-0, in the match.

The Badgers kept their momentum going into the second set, with three straight points to take a 3-0 lead.

Pitt took the lead, 5-3, on a 5-0 scoring run and built their lead up to 10-7 with some strong offensive play. They didn’t lose that lead the rest of the way, despite many Wisconsin attempts to make a comeback and won the second set, 25-21, to tie the match at 1-1.

Wisconsin took the lead again in the third set, with 6-4 lead, but Pitt responded with another 5-0 run to earn a 9-6 advantage.

Both teams traded points until Pitt led 21-20 and they took the set on some great attacking play. Graduate right side hitter Courtney Buzzerio made two kills and senior middle blocker Chiamaka Nwokolo and graduate outside hitter Cam Ennis each provided a kill, giving Pitt the set victory at 25-21.

The Badgers, for the third straight set, took the lead over the Panthers at 5-1. The Panthers managed to cut the Badgers’ advantage down to one at 9-8, but the Badgers went on a 6-2 scoring run to build a 15-10 advantage.

Wisconsin held on to that advantage with dominating play and won the set, 25-19, to force it to five sets.

Pitt took a 4-1 lead to start the fifth set, prompting a Wisconsin timeout. Junior outside hitter and serve specialist Cat Flood came in and delivered her third service ace to put Pitt up 2-1. Graduate middle blocker Serena Gray made a solo block and both Gray and Buzzerio got a block assist to take a three-point lead.

The Panthers improved their lead to 7-2 off two Badgers attack errors and a kill from Gray. The Badgers responded with two kills from Robinson, a kill from redshirt sophomore outside hitter Sarah Franklin and a service ace from junior setter MJ Hammill to cut the lead to two and force Panthers’ head coach Dan Fisher to take a timeout.

Pitt then got two points to get a 10-6 advantage off a kill from sophomore setter Rachel Fairbanks and a Wisconsin attack error and forcing them to take another time. Gray got a service ace, her second of the game, to extend the Pitt lead to 11-6.

The Badgers fought back with three straight kills, two from sophomore outside hitter Julia Orzol and one from Franklin to force Fisher to take his second timeout of the set. Orzol made two more kills and sophomore middle blocker/right side hitter Anna Smrek to take a 12-11 lead.

Buzzerio made a kill to level the set, but then Wisconsin made a block to take a 13-12 lead.

Pitt needed to do something to keep their season alive and Buzzerio did just that. She made a kill to tie the match, and then after redshirt junior outside hitter Valeria Vasquez Gomez made a kill of her own to give Pitt the lead, she made another kill to win the set, 15-13.

Pitt travels to Omaha, Neb. to take on ACC rival, No. 1 Louisville in the Final Four next Thursday Dec. 15. Pitt won the first matchup at home in five sets on Oct. 23 and Louisville swept Pitt on their court on Nov. 18.

Absolutely epic match. Pitt women’s volleyball is Must-see TV for anyone who can’t make it to the games live! Good luck in Omaha and H2P!

What an amazing group of young women, they oooze determination!
Can’t say I have seen that many digs in a match because Wisconsin
was really pounding away. Pitt’s resolve and determination are off the charts!!
H2P

To anyone thinking of going to to Final Four, you can drive it in one day (multiple drivers). Country Inns and Suites in Council Bluffs, Iowa is 10-minutes away from the arena, safe and cheap. We go to Berkshire Hathaway’s annual meeting in May. Old Town is just south of the arena with food, music and shopping. Have a great visit.