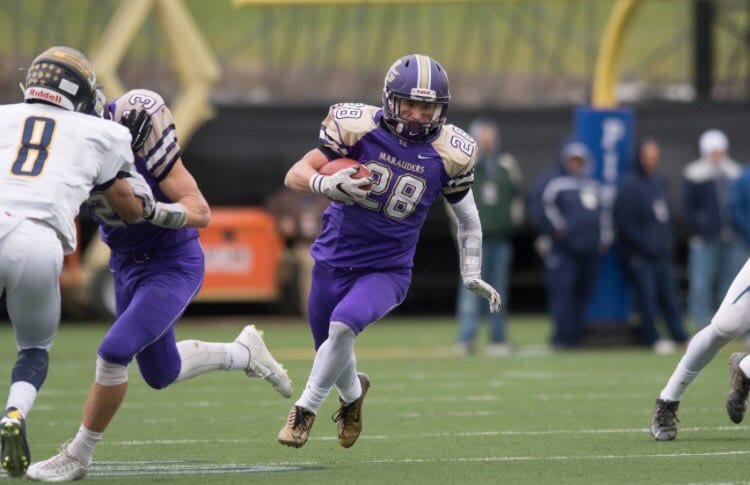 I think it’s safe to say that Evan Chadbourn is a FOOTBALL PLAYER!

The question now is whether or not Chadbourn is a Division-1 Power Five football player. The Pitt coaching staff will try to determine that this weekend.

Chadbourn (5-11, 185) will be one of the many prospects in Pittsburgh on Saturday or Sunday participating in the Pitt football camp and he’s excited for the opportunity.

“I’m very excited for this weekend. This is my first camp of the summer and I’m really looking forward to going out and competing”, said Chadbourn. “I’m hoping to show the coaches that I’m a competitor and that I’m strong and fast enough to help them win football games.”

“I’ve talked with Coach Sims a lot, probably about once a week.  He is very excited about me coming to camp this weekend. Coach Sims said the staff would like to see me play running back, wide receiver and defensive back this Saturday.  They want to see me compete on both sides of the ball and said either side could be an option for them”, said Chadbourn.

What would an offer from Pitt mean to you?

“An offer from Pitt would mean a lot to me and my family.  Pitt is a fantastic school with great tradition.  It’s also close to my hometown. Pitt is a program that’s on the rise.  They’ve had some very good recruiting classes recently and are bound to make some noise.  It would be awesome to play in the ACC and also to be able to play close to home and to play at a school that has such a long list of great players”

We’d like to wish Evan Chadbourn good luck this weekend and will follow-up with him after the camp.