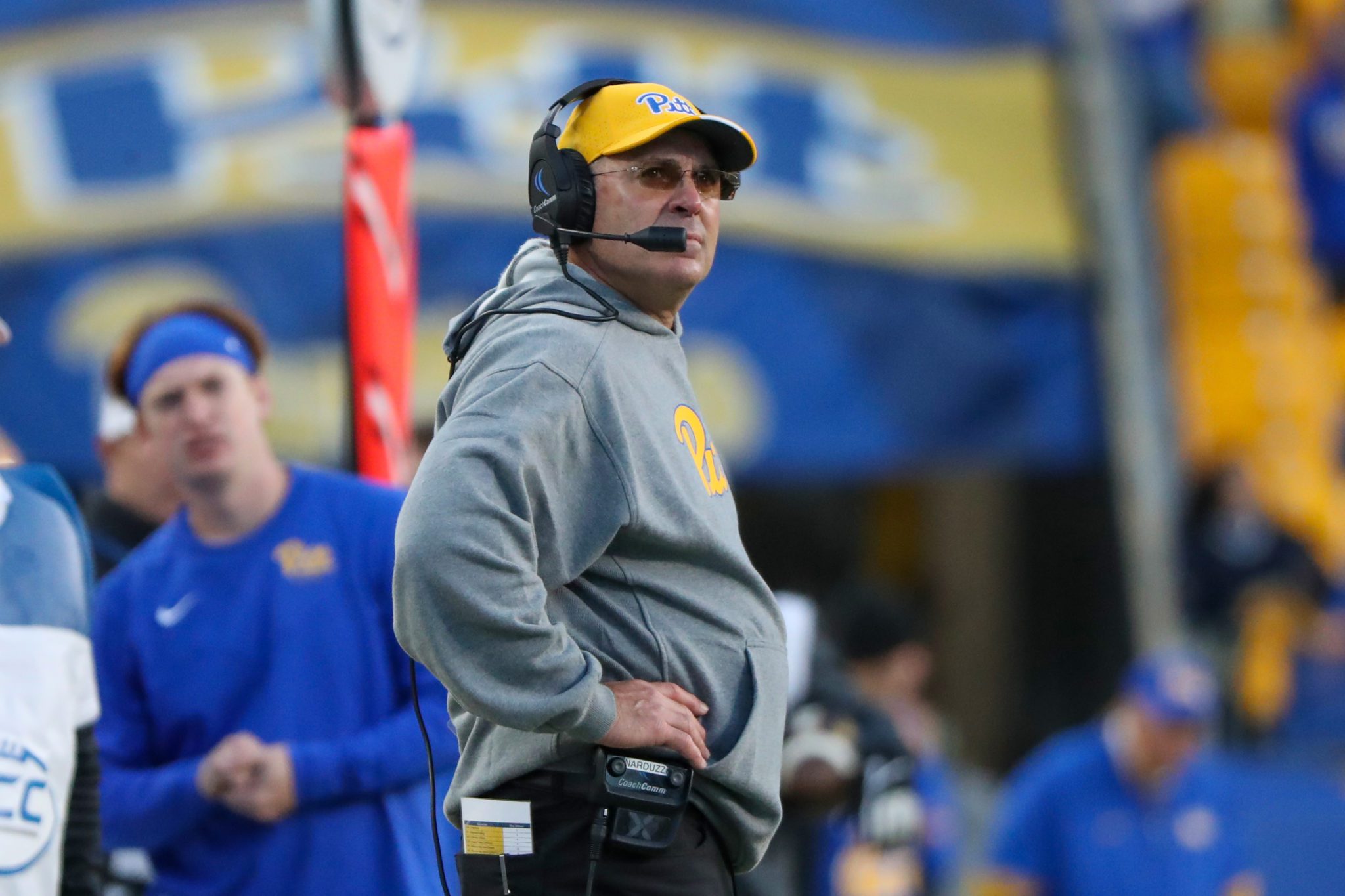 Pat Narduzzi was officially announced as the 36th head coach in Pitt history eight years ago today. A stretch of time that has been nothing if not eventful.

However, do not mistake eventful for unstable. Because aside from a conference championship, Narduzzi’s stability has been his greatest contribution to Pitt football.

In the five seasons before Narduzzi’s hire, dating back to Dave Wannstedt’s resignation in Dec. of 2010, six different coaches (Wannstedt, Phil Bennett, Todd Graham, Keith Patterson, Paul Chryst and Joe Rudolph) are credited with coaching at least one game. A list that obviously doesn’t even include Michael Haywood.

Narduzzi, the longtime Michigan State defensive coordinator and 2013 Broyles Award winner as college football’s top assistant, returned a bit closer to his roots by coming to Pitt — after growing up in Youngstown, Ohio and attending Youngstown State. He also immediately began the process of staying true to Pitt’s roots, installing his personal brand of defense.

Through eight seasons, Narduzzi has certainly done so. A style of aggressive, man-on-man defense that is truly unique to Narduzzi himself — for better or worse. From a unique kind of coach that fits Pittsburgh better than perhaps anyone could’ve expected.

In eight seasons, Narduzzi has put together a 61-41 record (41-25 ACC) that includes two ACC Coastal division titles and, of course, the 2021 ACC championship — the first in program history.

While the 2022 season didn’t hit the highs that the 2021 season did, failing to return to the ACC championship game and losing a couple of games that slipped right through his fingers, it encapsulated Narduzzi’s tenure. It’s sometimes frustrating. It’s sometimes euphoric. But it’s never a question of effort and heart.

With a 4-4 record, coming off a shellacking against North Carolina on the road, which included a blown lead in the second half, Pitt football reached a crossroads. A repeat was out the window, and another double-digit win season wasn’t going to happen either.

Pitt could either roll over and die, completely collapse and kill any momentum built off the championship, or string together four wins in a row and close the 2022 season on a winning note.

Narduzzi’s Panthers chose the latter — and earned a chance at a ninth win Friday against No. 18 UCLA in the Sun Bowl.

In the last two seasons, Pitt has put together 11-2 and 8-4 regular seasons and produced consensus All-Americans in Jordan Addison and Calijah Kancey and a first round NFL Draft pick in Kenny Pickett. It’s a stretch of wins that hasn’t been seen since the 2008-09 seasons. And with a Sun Bowl win, it would be a stretch of wins unseen since the 1980s.

The moments, especially over the last two seasons, will not soon be forgotten.

Pitt reached the top of the mountain on a fateful night in Charlotte, North Carolina last December, celebrations lasting well into the morning at Bank of America Stadium and in downtown Oakland, after an ACC championship victory.

The renewal of the Backyard Brawl against West Virginia in September allowed the largest crowd to attend a sporting event in Pittsburgh to watch hometown hero M.J. Devonshire return a J.T. Daniels interception for the game-winning touchdown — perhaps the loudest a crowd has ever been at Acrisure Stadium for Pitt football.

Narduzzi isn’t perfect. He’s stubborn to a fault. He’s not one to back down when the mic is in his hand, which includes being one of the few to actually name names. And he hasn’t quite been able to avoid letdowns over the years. But he’s built a team in Pittsburgh that is as steadfast and hard-nosed as he is.

He’s also going to be staying in Pittsburgh until at least the 2030 season, after signing a contract extension over the offseason.

“I love Pitt football and the University of Pittsburgh,” Narduzzi said in the press release. “Pitt is truly home for my family and me. We are proud to represent this outstanding university and live in this tremendous city. I am so appreciative of our players, coaches and staff. Nothing great can be accomplished without their efforts and commitment. I’ve always talked about the importance of pushing together in the same direction. We have that at Pitt across the board.”

Narduzzi said afterward that he knew the deal had been done for a while, but he wanted to make sure that his coaching staff was taken care of at the same time.

Narduzzi is second all-time at Pitt with 61 wins, passing the legendary Pop Warner with a win over Miami in the season finale, and his .598-win percentage over 102 games speak not only to his longevity but his winning ways. Those wins didn’t result in much early on, but the program has consistently grown under his leadership.

It takes a city like Pittsburgh — a fanbase like Pitt’s — to both appreciate and denigrate the kind of coach Narduzzi is, and he’s the perfect coach for it. It may not always be perfect, but Narduzzi embodies the spirit of Pitt football.

In the days of NIL and the transfer portal, with Narduzzi himself drawing plenty and plenty of attention as a coach who hasn’t been afraid to voice his thoughts, he’s also embraced the new age and added where he’s seen fit.

The 2023 season will be Narduzzi’s ninth in Pittsburgh, and while it comes with a difficult non-conference schedule, his ability to reload and lead Pitt forward will be a key factor in further success.

I am glad we have Pat and I hope he stays for a long time. He’s a good guy and cares about his players. I think he is doing a good job.

I didn’t realize his ACC record was that good. Narduzzi took over a pretty bad program and recruiting was really poor. He’s not great, but great for Pitt!
H2P!!!

But unfortunately he’s called many boneheaded plays and has used so many timeouts horribly that he’s really taken away from his own shine. His clock management is terrible.

And yes, while he has been consistent, his glaring upset losses over the years has painted him as an average coach.

Add his stubbornness to either switch players when they suck or change a defensive scheme when they are getting scorched, and his legacy gets tarnished.

what gave it away?

PN is great for Pitt. He has high integrity, he really cares about his players. He’s learned quickly how to deal with the free agency in college football.
I hope that he stays at Pitt a long time.

Many people didn’t believe him when he said “I’m home” at his original press conference, but he proved it by turning down the Michigan State head coaching job. He has a solid, pretty stable and underrated coaching staff. He has elevated Pitt’s profile in this area. I expect that he can and will win more ACC Championships.

Not to nitpick but he didn’t inherit an empty roster–He inherited Paul Chryst’s foundation that HCPC did a nice job establishing. He inherited a really good team. His first two seasons at 8-5, while good for Pitt standards at the time were actually about 3 or 4 games below where they should have been. Hell, all he needed to do was give some safety support to those overwhelmed CBs and he could have salvaged at last 3 wins easy but he NEVER made any adjustments. Additionally over the past 8 seasons, Pitt has blown a tremendous number of leads in… Read more »

Exactly. I’ve been saying the exact same since his first season. Each year should have had two more wins they give away with his idiotic man coverage he won’t go away from.

well written comment…yes Hamilton dropped a TD that would have capped the comeback win, so technically it’s 0-4 including the 51-6 slaughter.
Let’s hope he stays till 2030 but I would be surprised.

tech-ni-cal-ly: according to the facts or exact meaning of something; strictly
…so technically it’s 1-3.

Or 2-2. Pitt outplayed PSU in the 17-10 2019 game. They score a Td and win in OT had Whipple and Narduzzi not gone cowardly on the 4th and goal at the one. Twyman used Clifford’s head as a jackhammer a few times that day. I am sure you watched and remember. The 2017 and 2018 games were beat downs by PSU. The 2016 game PSU never led in that game. Can’t win a game you don’t ever lead in.