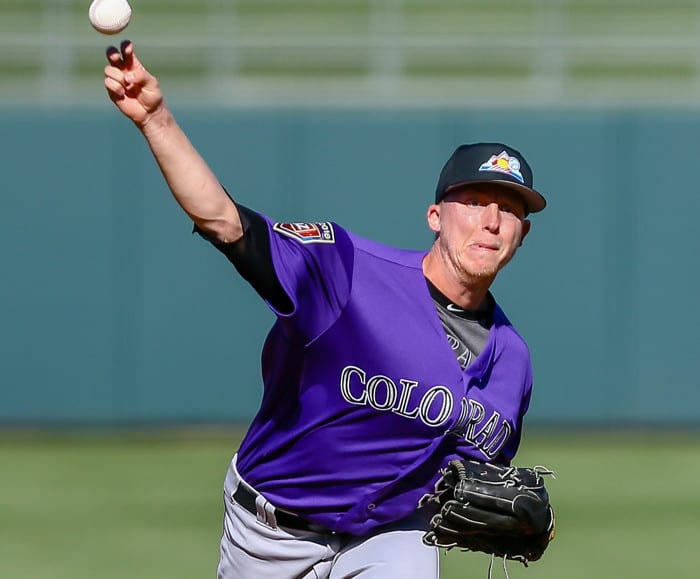 When USA baseball arrives in Tokyo later this week, an experienced guide will join them.

Right-handed pitcher Scott McGough, a former Plum High School standout and Pittsburgh native, has been playing for the Tokyo Yakult Swallows of Nikon Professional Baseball (NPB) for three years and is thriving. Now he is interrupting an All-Star season in Japan to play for his country in the Tokyo Olympics.

McGough’s been behind the lines of an of an opponent he didn’t know he’d face, gathering intel that he didn’t know would be so immediately valuable. He’s in the right place at the right time and hopes that a wealth of knowledge about international baseball can help lift Team USA to gold.

McGough told Pittsburgh Sports Now that he mentioned wanting to play for Team USA to his agent back in March and quickly found out that he was one of 125 players that the Olympic Committee for baseball was considering for the 24-man roster. A few months later, he got the call he’d been waiting for.

“I was thinking two years ago ‘Man, that’d be really cool [to play in the Olympics],’” McGough said. “Didn’t think anything of it, didn’t reach out to anyone about it. I played on the college national team back in 2010, but I never called anybody and I didn’t have any connections or nothing. So fast forward to maybe this March and I ask my agent ‘Hey, did they pick the team yet?’ … He was like ‘Well I know in November, I talked to the general manager of the Olympic Committee for baseball and he said that they have 125 guys that they’re looking at for the roster and your name was on it.’ So I said ‘Okay, sweet.’ Fast forward to maybe a month or so ago … I get the call and they asked ‘Would you play for Team USA?’ I said, ‘Of course, I’d love that.’”

McGough was not able to join the team for training camp in North Carolina this past week because it conflicted with his obligation to the NPB All-Star games. McGough earned a spot on the Central League roster after posting a 2.39 ERA over 39 appearances for the Swallows so far. this season.

Scott McGough, Noboru Shimizu, and Yuhei Nakamura have been added to the CL All Star squad. They will join Tetsuto Yamada and Munetaka Murakami who were voted in by the fans. https://t.co/i2qSkFOP6e

Last weekend, while Team USA was gathering for their first workouts together, McGough threw two innings of scoreless relief for the Central League team in a 5-4 loss to the Pacific League.

He just wrapped up his time with the Central league All-Stars on Monday and expects to join the Americans — who’s roster showcases a wide range of ages and levels of experience — in the Olympic Village on Thursday. McGough believes that it’s an easy-going group that won’t have to deal with dominating egos.

Among the varied American players is one of McGough’s old friends and mentor, Edwin Jackson, a 37-year old MLB journeyman. He said he looks forward to reuniting with Jackson and picking the brains of teammate Todd Fraizer and manager Mike Scioscia. But most importantly, McGough — like his teammates — is locked in on the gold medal.

“I think these guys, from what I know about them and what [Jackson knows], it’s going to be an awesome mix and everyone will be really loose, everyone having fun and trying to win this gold medal. And I think it’s a good combination of old guys, young guys and then guys like me or Tyler Austin or Nick Martinez who are kind of in the middle. It’s kind of a perfect mesh of ages that will go really well together.”

In the pursuit of gold, McGough hopes he will be able to help teach his teammates about the contrasting styles their opponents play with.

On one side, there are what McGough calls the more “Americanized” teams — Mexico, Israel and the Dominican Republic. These teams play a power-driven brand of baseball. They try to throw hard, hit lots of home runs and try to overwhelm their opponents.

Then there are the more traditional teams in Japan and South Korea. McGough says these players tend to be more surgical. Singles, sacrifice bunts and stolen bases are more common and runs are manufactured meticulously.

Between seven years in the American major and minor Leagues plus four years overseas, McGough can compare the differing styles of play using first-hand insight.

“I think Mexico, I think Israel because they’ll have a lot of guys from the States, they’ll play pretty Americanized baseball, but over here it’s different,” McGough said. “The main difference is, in America everybody is trying to hit a home run. Even the second baseman has 20 home runs a year. So gone are the days when you’d have a small guy who would get on base. But here, that’s what it’s about and there’s three big boppers in the middle of the lineup. Otherwise, these guys are choking up, two fists on the bat and they are just making contact. It is impossible to strike them out.”

McGough will likely be one of the only Americans with fans rooting him on from the stands of Yokohamo Stadium on July 30, when Team USA opens their tournament run against Israel. His cheering section will be small — just his wife, Lauren and infant daughter, Dakota — but McGough considers himself lucky nonetheless because of what it took to get them there.

Lauren McGough went into labor last year with her first child last year and she went back to the US to give birth. By the time she was ready to rejoin McGough, Japan had closed it’s borders to foreigners. After navigating a long-winded process to file for an medical exemption, Lauren and Dakota were able to return to Japan in June.

“Japan locked their borders and last year my wife left to give birth back in the States,” McGough said. “And she just filed, it’s called Special Medical Circumstances, and she went home and she wanted to come back. It took months and months. The Japanese government finally gave her permission. … So I’m super, super happy that they’re here just in time to see me play in the Olympics.”

For all of the relative familiarity to the setting that McGough has compared to his teammates, how and when he’ll be used is up in the air. Nonetheless, he’s ready for this challenge and eager to help win gold in anyway possible.

“I have not talked to Scioscia just yet about my role,” McGough said. “I honestly, and this is what I told the staff, whatever they want me to do, I’m totally fine with anything. I’m just excited to be on the team and want to help go win a gold medal.”